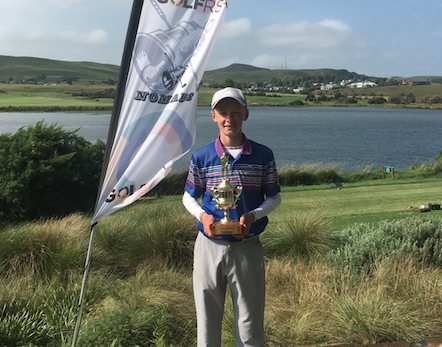 Kempton Park junior golfer Jonathan Wilsenach captured his first national title in stunning fashion after a final round 76 gave him the chance to defeat Jordan Wessels in a playoff for the Nomads SA Under-15 Challenge title.

The 14-year-old Ekurhuleni junior beat Wessels with a par at the first extra hole to triumph after the pair tied on seven-over in regulation play.

“The overall experience at Gowrie Farm was unforgettable,” he said. “It’s one of my favourite courses to play and the hospitality was unbelievable. Nomads do so much for junior golf and this was another really fun event for juniors and a great learning experience. I’m really glad I’ve won my first one and next up is the Sun City U-13 and U-15 Challenge, which I can’t wait for.”

Wilsenach opened with a three-over 74, but overcame a six shot deficit with a second round 70 to lead the field into the final round.

He kept in front of the chasing pack through the first nine holes, and holed several tricky putts on the back nine in an enthralling battle of wits with Gauteng North’s Wessels.

“I didn’t get off to the best start, but a really good second round put me in contention. My original game plan was to play aggressively for the first two rounds and then to keep myself in contention in the final round, but conditions were very tough on the final day,” Wilsenach said.

“It was overcast, cold and very windy. I felt pretty confident going into the round, but looking back I probably played a bit too defensively on opening nine and I made a few early bogeys.”

He dropped shots at 13 and 15 to fall a shot behind Wessels, but the most important putt of all came at the 17th when Wilsenach – after Wessels made par at the short hole – boxed a birdie putt to level the score.

The pair halved the closing hole in pars to take it to extra holes.

Under the most intense of pressure, Wilsenach rolled his par putt into the cup on the second trip down the par five 18th and clenched his fist in celebration.

“Over the rounds, I only made 11 bogeys. Six of them happened in the final round, so I was glad to be able to keep it together,” he said.

“I wanted to put myself into a good position off the tee in a playoff, so that I could lay up to a comfortable distance. I hit driver down the left and 8-iron to about 85 metres out. From there it was a knock-down sand-wedge onto the green.

“Jordan’s third landed 25 feet above the hole and mine landed on the back and spun off the slope. It was tracking to get really close, but it hit Jordan’s ball, so that was a bit unlucky. He pushed his birdie putt five feet past the hole and I lagged mine close.

“When he missed, I had a three-footer to win. I felt confident over the putt. I just had to forget about the thought of missing and just make a good stroke. It went in and it was a really good feeling knowing that I had won.

“I have been practising a lot, because I felt like this was an event that I could win. I’ve been playing around five times a week to prepare, so I went there with good form.”

Wessels had to settle for second, but it was a vast improvement his 31st place finish in 2018.

Fellow Gauteng North junior Phil Snyman also made giant strides, taking third on eight-over after a tie for 21st last year. Michael Ferreira made it three in the top four for Gauteng North when he edged out first round leader Luc Gavagnin from North West by two shots to finish in fourth on nine-over 222.