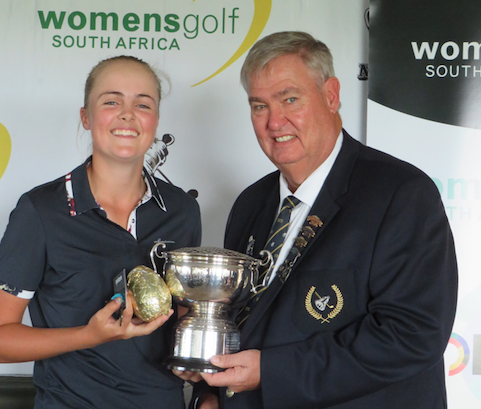 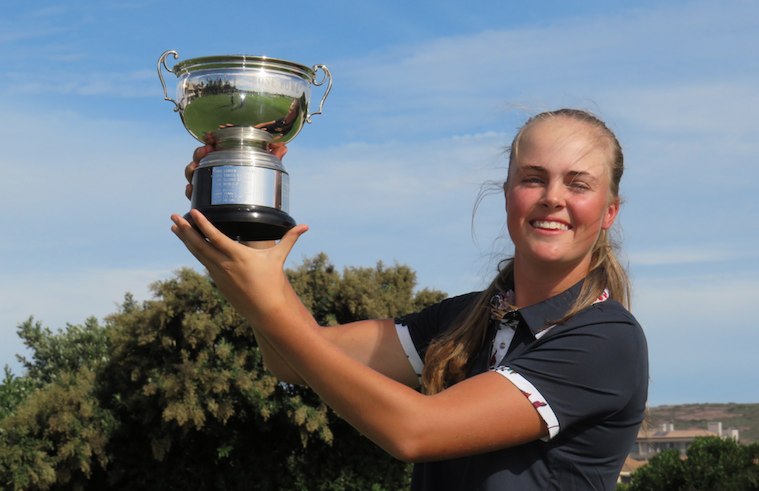 The Western Province junior carded a two-under-par 70 in the final round to close out a one-stroke victory on one-over 217.

“Every junior on the circuit dreams of winning one of the two Nomads national junior championships, and I am over the moon,” Williams said. “I came close last year but couldn’t pull it through at Royal Cape, so I am extremely pleased with this result.

“I am so grateful to Nomads for giving me and everyone this wonderful event and the Nomads SA Girls Championship at Orkney and I would like to thank GolfRSA and Womens Golf South Africa for the opportunity to play in two world-class events. And lastly, thank you to Caitlyn for an intense battle in the final round.”

Williams began the final day on three-over and a shot behind fellow GolfRSA Elite Squad member Macnab, but a couple of birdies on the outward loop helped the Durbanville golfer to race into the lead with nine holes to go.

“I started with a great up-and-down after half-shanking a 5-iron from the middle of the fairway,” said Williams, who managed to save par while Macnab bogeyed the opening hole.

“Saving par gave me a nice confidence boost, but Caitlyn took back the lead with a birdie at the third.

At the fourth, I hit a great bunker shot and I holed a three-metre putt middle cup to draw level again.”

The Bellville golfer missed birdie chances at five and eight, but edged into the lead when she answered bogeys from Macnab at seven and nine with a birdie before the turn.

“The ball went straight over the hole at five and my putt skimmed the hole at eight, but I stayed patient; I knew I’d get one of those birdies back,” said Williams.

“At the ninth, I stiffed my gap-wedge to tap-in and I led by three shots when Caitlyn dropped another shot at 11. I extended my lead with a two-putt birdie at the par five (12). I hit a good drive and my 5-iron approach hopped out of the bunker on to the green.”

South Africa’s top ranked junior hit back with a brace of birdies at 12 and 13 to shorten the gap and Williams led by just a single shot with two holes after bogeys at 14 and 16.

“I got nervous and I choked,” admitted Williams. “I had a birdie chance at 13, but misread the line, but Caitlyn made hers to put some pressure on me.

“During the practice round I hooked two tee shots at 14. I told my dad, who was on my bag, that I dreaded this hole. The wind was coming off the right and I worried I’d hook the tee shot again. I hit a perfect tee shot, though, and then I choked on the approach and ended up two-putting for bogey.

“At 16. I pulled my 6-iron into the bunker. I took the wrong club out of the bunker, and I knew it was a mistake as soon as I hit the trap shot. Another two-putt bogey.”

Macnab had Williams on tenterhooks when she got a good look at an eagle at the final hole to force the tournament into over-time.

“We both parred 17 and I stood on the 18th tee with a one shot lead; my dad wanted me to go down the right, but I took out the driver and took the Tiger line,” Williams said.

“I got rewarded for the aggressive approach with a perfect lie in the middle of the fairway. Caitlyn also hit a good drive, but she caught some wind and her ball finished in the first cut of the rough. We both hit the green in two, though, and the pressure mounted.

“I lagged my first putt about 2 feet short of the hole. Caitlyn’s eagle putt just rimmed the hole and she tapped in for birdie. I took a huge breath when I stood over my putt. I just told myself this is the one you have to make and it dropped. We both played really solid golf and it was a great contest, right up to the final putt.”

It’s the second win of the season for Williams, but her first success on the junior circuit helped her to close the gap on Macnab in the GolfRSA Junior Rankings.

Macnab from Ekurhuleni took second on two-over with a final round 72.

Gauteng junior Kaiyuree Moodley closed with an even-par 72 to finish third on 221, while Kiera Floyd from Ekurhuleni and Gauteng’s Symone Henriques tied for fourth on seven-over after rounds of 73.

Written by Lali Stander, on behalf of GolfRSA