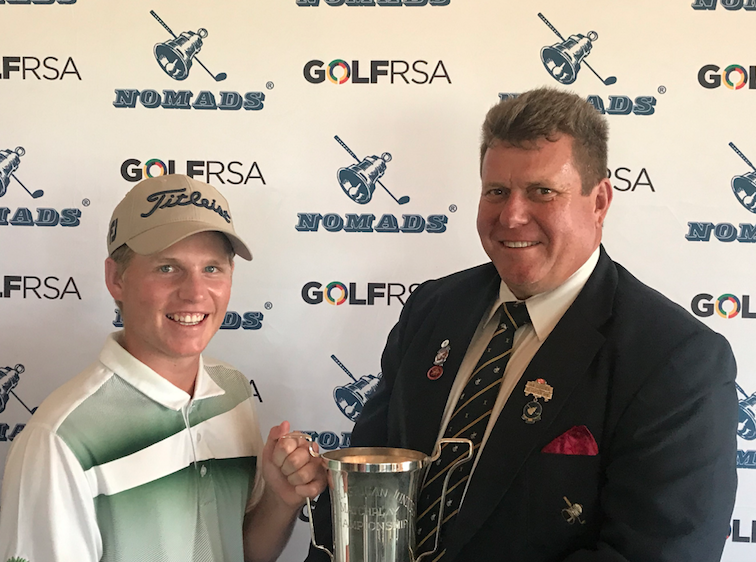 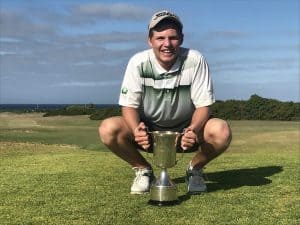 The pair were all square after a thrilling 36-hole skirmish at Humewood Golf Club and had to return to the first tee to battle it out in sudden-death play-off.

Van Wyk’s 4-iron tee-shot split the fairway, while Simpson’s drive went long left into the rough. The Western Province junior attempted a bump and run, but his effort was deflected by a sprinkler head and his third shot came up well short of the pin.

Van Wyk had 120 metres to the flag and he hit lob-wedge to the heart of the green. He lagged a 40-foot putt to three foot and boxed it for par and the win.

“I’m so excited about this win,” said the 18-year-old Van Wyk. “I’ve lost count of all the close calls on the provincial and the national circuit. I came to Humewood with a simple goal of finishing in the top 10 in the stroke play qualifier.

“I finished seventh and from that moment, I just felt positive. I felt that my time had come.”

Van Wyk mowed down Jaime Lewis from Central Gauteng 7 & 6 to make the top 16. He routed fellow Southern Cape golfer Liam Ross 6 & 5 in the second round, and downed local favourite Malan Potgieter 4 & 3 to reach the semi-final. Another 4 & 3 result against Ryan van Velzen from Ekurhuleni guaranteed his spot in the final.

Simpson, who claim a three-stroke victory in the 72-hole Stroke Play qualifier, knocked out Oliver Goldhill from North West 2 & 1 in the first round and bounced fellow Western Province junior Ayden Senger 2 & 1 to reach the quarter-finals.

He beat Barend Botha from Southern Cape 4 & 3 to make the top four and handed another Western Province South African Under-19 Inter-Provincial team-mate, Tyran Snyders, his walking papers with a 2 & 1 win in the semi-final round.

“Sam is ranked second on the GolfRSA Junior Rankings, so I expected a very tough match,” said Van Wyk. “He is a class act and he never stopped fighting. We had an amazing battle today.

“I was 2-up after the first three holes this morning and he squared the match. I went 2-up again at the seventh, and he birdied the 10th. When I bogeyed 18, we were back to all square.

“In the second round, I went 1-down with three bogeys in a row from the second hole. I hit a great chip at the eighth and squared the match and went 1-up with another good up-and-down at 11. Sam dropped at 12 and I dropped on 13 and 14 and we were back to level.

Both golfers made four at the closing hole and the match went into overtime. Van Wyk needed just one extra hole to claim the prestigious trophy.

“This is a really huge moment for me,” said the McKinlay Reid International School matriculant. “I have known for a long time now that I was due a big win, but I didn’t expect to win the match play in my wildest dreams.

“I came into the final determined to play the best golf I could and I am over the moon. I didn’t hit my driver and my long irons well in the first 18 holes, but my chipping and putting saved me. We both actually played pretty scrappy golf over the first 18 holes.

“I hit my driver really well in the second round and again, chipped and putted very well. The conditions were not kind, with the wind really pumping hard. I want to congratulate Sam on his stroke play win and his sportsmanship in the final. He was a brilliant opponent and he made me work for the win.

“I would also like to thank my parents and my brother CJ for their support. You can’t play this game without people who believe in you and I have the best support group.

“I would also like to thank Eden Thompson, Bruce Younge and GolfRSA for a fantastic tournament. The biggest thank you goes to Nomads. Thanks to Nomads South Africa, we have a fantastic junior circuit in South Africa where we learn to compete and prepare for the big stage. All us juniors owe Nomads a huge debt of gratitude for giving us this platform to compete on.”