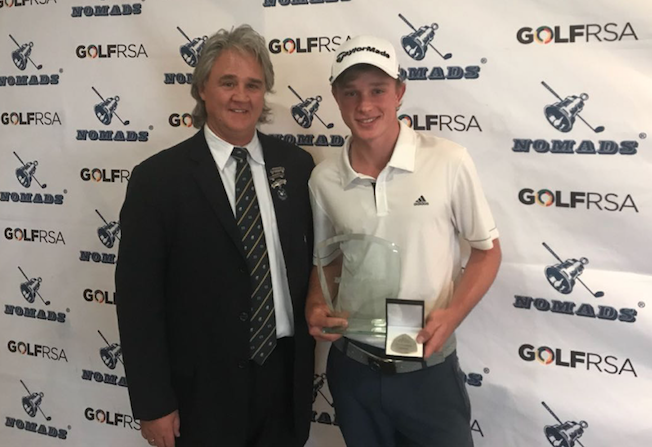 Jayden Schaper, the only golfer to have won all four Nomads junior age group titles, was at it again when he won the Nomads North vs South event at Country Club Johannesburg.

The former No 1-ranked junior had experienced a lean spell, going 12 months without a national title, but recent wins in the Ebotse and Fancourt Club Championships saw the 17-year-old hint at a return to form on the Rocklands layout.

Rounds of 68, 66 and 67 gave him the edge over Cole Stevens by a stroke. Kian Rose and current Nomads SA Boys U15 and U17 champion Casey Jarvis shared third place.

“We both made par at 17 and I knew I need a birdie finish to win,” said Schaper. “Normally I hit 2-iron off the tee at 18 and 9-iron or wedge into the green, but I’ve been hitting the driver really well, so I went with it and hit a great shot down the middle. I hit lob-wedge from 95 metres out and the ball spun back to six foot. The putter was a bit cool all day, so it was great to hear the ball drop in the cup.”

Schaper now heads off to the USA, where he will be taking part in the Junior Players Championship.

“I’ve got great memories of that event, because I made birdie at the last hole last year to make the International Team for the Junior Presidents Cup,” he said. “I didn’t have great results during the GolfRSA National Squad Tour to the UK, but I came back with so much experience. I learned a lot about myself and it highlight the things I needed to work on. I’ve put in some hard work in the last month and it’s really pleasing to see it pay off like this.”