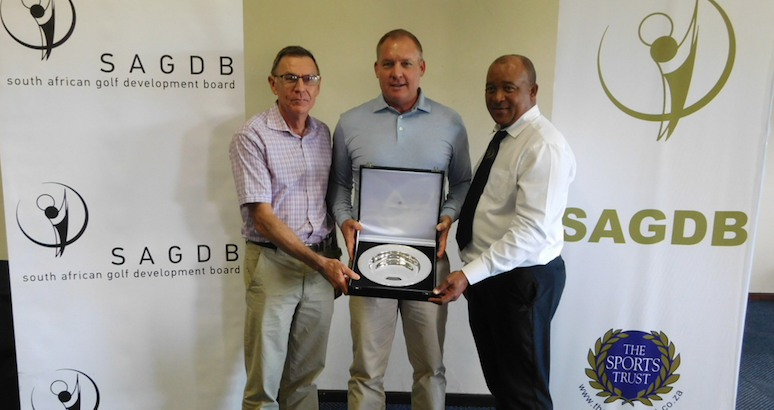 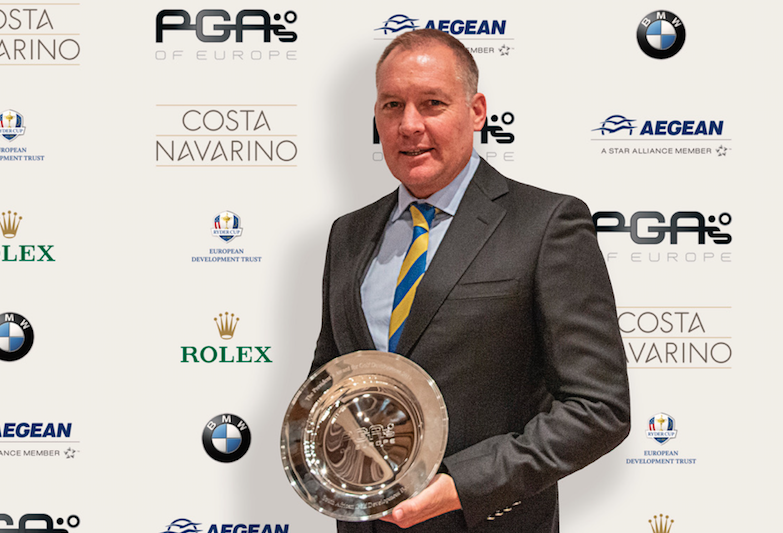 SAGDB’s Grant Hepburn accepted the award from the PGAs of Europe.

The South African Golf Development Board acknowledged the important role that Nomads plays in growing the game of golf in South Africa, as the organisation received a prestigious international award.

The SAGDB is the latest project to be awarded the PGAs of Europe President’s Award for Golf Development at the 2018 Annual Congress Gala Awards Dinner Supported By Rolex at Costa Navarino in Greece.

The President’s Award for Golf Development aims to acknowledge the work of an individual or project that has excelled in developing golf. The SAGDB has helped over 17 000 young people have been coached through their programme across 14 areas of South Africa, with the aim of broadening the golfing community and transforming its composition to be more representative of society.

“For a small country like South Africa to be recognised internationally by the PGAs of Europe really is something special,” said SAGDB Managing Director, Grant Hepburn. “It is a credit to the people back home that do the work – our coaches around the country, our managers – and obviously the youngsters who participate in the programme who have done so well.”

The SAGDB has been successful in part at least due to the collaborative nature of the Board and the support given by the Department of Sports and Recreation, The R&A and a variety of South African golf organisations such as the Sunshine Tour, PGA of South Africa, Nomads and GolfRSA, as well as financial supporters, The Remgro Group and Alfred Dunhill Links Foundation.

Hepburn added: “We need to say thank you to Mr Johann Rupert who founded the SAGDB in 1999 and has been the chief benefactor ever since. What he does for the Board, for golf in South Africa in general, is amazing. It is nice that we can win this award and give something back to our supporters by achieving something and being recognised.

“We are fortunate that the golf clubs are involved, all 14 golf unions are involved, and we have corporate South Africa involved as well – and it is really important that the PGA plays a big role too – they help us with our coaching programmes, they legitimise what we do, they endorse our coaching programme, and recognise our coaches, so that’s really important to us. We are also grateful for the generous support of Nomads, who provide regular playing opportunities and financial support for our players.”

The children that take part in the programmes are often those that would never have come into contact with golf, bringing a new audience to the sport and increasing the number of players at all levels.

The SAGDB is also able to then offer them additional social benefits such as helping the children become positive and stable role models and mentors in their own communities through exposure to the discipline, etiquette and values that they learn through the sport. They also become healthy and active and can become economically independent with their acquired skills making them valuable members of their local communities and society in general.

The programmes are another way that golf can be taken directly to people, particularly helping underprivileged communities through the provision of free coaching and practice equipment, and nurturing elite players by sponsoring equipment, club fees and competition participation and making facilities more accessible.

Many of the children that have been a part of the programme have taken on golf as their sport with one senior national player and four players in senior national squad, 25 senior provincial and U-23 players, close to 200 junior provincial players, and over 1,500 junior tournament players. Thirty four of its most talented players have been invited to join prestigious and recognised High Performance Centres such as the Ernie Els & Fancourt Foundation, and six former SAGDB players have earned their tour cards on the Sunshine Tour.

The work of Hepburn and his colleagues continues with a vision to make golf more accessible in South Africa by providing and facilitating practice and playing opportunities for learners and talented players from all the underprivileged communities.

“I think if we strive to improve in terms of the results that we get and focusing as much on results as social-uplift, then I think we’re doing our job well. Hopefully it keeps going the way it’s been going – we’ve had success and I don’t think we need to change much, but we do need to keep looking after the core values of the SAGDB and keep moving forward.”