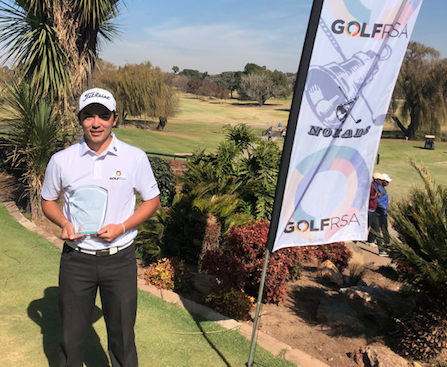 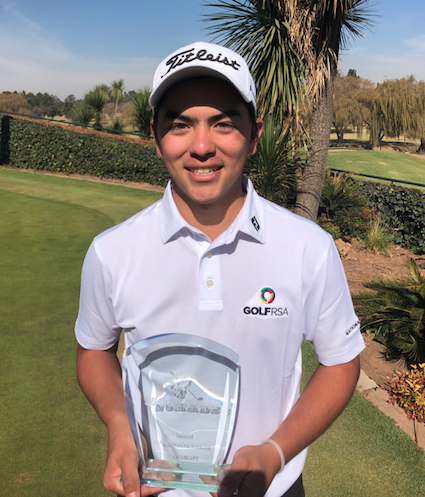 Central Gauteng’s Kian Rose holed a timely chip shot from over the back of the green for birdie on the final hole to snatch victory in the Nomads Inland NOoM event at Modderfontein.

Having struggled to a level par opening round, Rose made five birdies, an eagle and solitary drop to win by a stroke over Nikhil Rama,

“The first day was a little messy,” he explained. “I think I only hit seven greens in regulation, but thankfully my short game kept me in it.

“I was only two back and I knew I couldn’t play as badly as the first round, so it was a relief when I started well. From then on it was almost perfect – I was hitting fairways and greens and I only made one mistake, on the 17th.

“I even holed out from the bunker for eagle on the 13th and then I chipped in for birdie on the last.”

Rose may have benefitted from some local knowledge, as he was a member at Modderfontein in his earlier days, although he admits it had been over two years since his last round on the course. Thankfully for him, the familiar surroundings brought out the best in his game.

“I had been going through a rough patch with my long irons and my driver but when I started the second round, everything just fell into place’” he said. “I’m so happy with this win, it’s definitely my best so far because of the level of competition in the Nomads events.

“I love playing the Nomads tournaments because I can test myself against the best juniors in the country on some of the best courses.

Rama shot a second-round 68 to finish alone in second, although the 17-year-old Bryanston junior will feel like he let one slip away with a bogey and a double bogey from the 14th hole. He made amends with a birdie on the 17th, and a two-shot swing, but was ultimately undone by Rose’s birdie chip.

Samual Mckenzie finished third on 2 under, Christiaan Maas was fourth on 1 under and Kieron van Wyk and Nash de Klerk shared fifth spot.