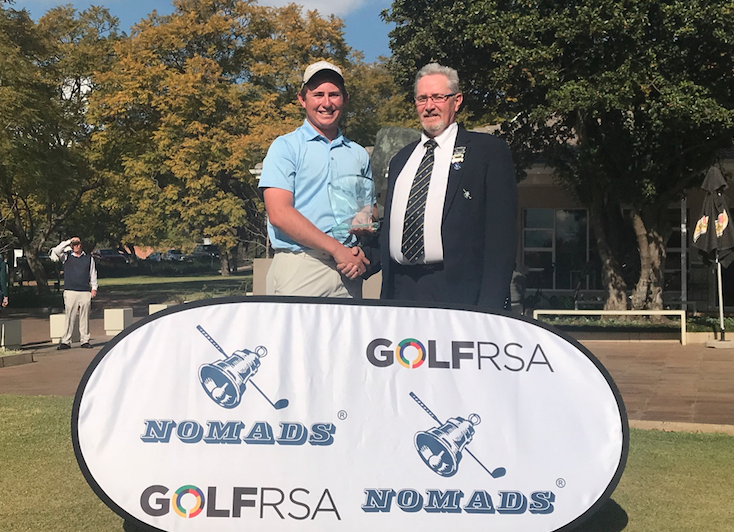 Christiaan Burke came out tops in the final Nomads National Order of Merit event when he beat GolfRSA National Squad member Martin Vorster with a brilliant birdie on the first playoff hole at Bryanston Country Club to claim his first title on the top tier. Both players had ended regulation play on 9 under par.

The 17-year-old Burke, from Potchefstroom, has won several club championships and Open events on the North West roster, but success in the national event was by far the biggest of his blossoming career.

While overnight leader Ryan van der Klis from Kyalami Country Club, Daniel van Seumeren from East London Golf Club, Burke and Vorster all took turns at the top of the leaderboard during an exciting final round, it was Vorster who took charge with birdies at 13 and 15 and a stunning eagle on the par-five 17th.

Burke, playing in the final group, was two off the pace after a bogey at the par-four 16th, but his own eagle at the 17th saw him take a share of the lead.

The playoff saw both Burke and Vorster pull their tee shots left. Vorster had tree trouble and was forced to draw a gap-wedge around the trees. He finished three meters left over the green and chipped it to gimme distance, but it was too little, too late as Burke’s approach pitched in front of the flag and finished a foot from the hole.

“This is a huge win for me,” said Burke. “My team-mates from North West (Andre van Dyk and Herman du Plessis) told me at the 17th tee that Martin was putting for eagle. So I knew that I needed an eagle to force a playoff.

“It is one thing knowing what you have to do, and another to execute the shots, but I hit two great shots and knocked the putt in to give myself a chance. Going up against Martin was tough, because he drives it a mile and his short game is always solid.

“But I played really well all day and when we both hit our tee shots left at 18, I knew this was my chance. I had 123 metres flag and I hit a great sand-wedge to a foot. I am really stoked, because I’ve worked so hard to win at this level.

“There are a huge bunch of really good juniors on the circuit at the moment, and this makes me really happy and confident that I can beat all of them. My biggest goal is to represent South Africa in the All Africa Junior Golf Challenge and ultimately, the Junior Golf World Cup in Japan.