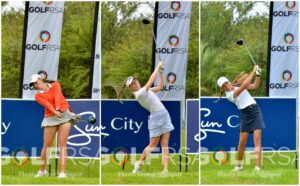 Barbaglia, a member of the GolfRSA National Squad, opened with a solid round of level par 72 to share the lead with Country Club Johannesburg’s Whateley and Centurion Country Club’s Zane Kleynhans. She followed that up with a second-round 73, to hold onto her lead, together with Whateley, entering the final round.

The sixteen-year-old kept things steady as first Whateley, with a triple-bogey on the 9th, and then Kyra van Kan, who made a triple bogey on the 11th, fell away.

An eagle from Whateley on the 11th brought her back into the contention but Barbaglia was able to hold her nerve down the closing stretch to close out a one-stroke victory.

“My iron play was really solid this week, and it helped me stay consistent and out of trouble,” she said. “I could feel the nerves coming on towards the end, so the birdie on the par-three 15th was key, as it gave me some breathing room.”

Barbaglia dropped shots on the 16th and 17th holes, but a solid par on the closing par five – as Whateley’s long birdie attempt agonisingly lipped out – was enough to secure the biggest title of her career.

“I’ve been working really hard on my game lately,” she said, “so for everything to finally come together for me to get my first big win is amazing.

“I want to thank Nomads for everything they do for junior golf in the country. To be able to come here to Sun City and play such a stunning golf course is a real privilege for us.”

In the B Section, Zwartkop Country Club’s Lea van der Merwe made it two national titles in a row when she edged Anna-Isabel Scheltema by a single stroke. Van der Merwe, who recently claimed the B-Division title at the SA Amateur Championships, shot rounds of 80, 88 and 81. Her twin sister Ame finished in third spot.